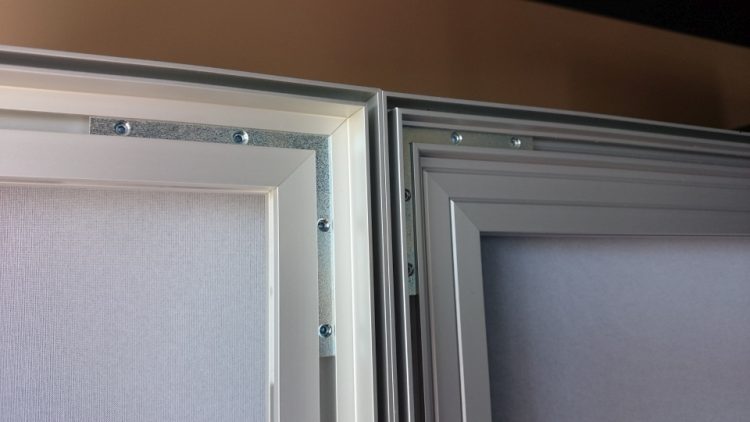 When it comes to partition walls and suspended objects with advertising messages, for many customers double-sided LED lightframes are the real deal. Frames such as TRENDSTAND’s new V92 system. But the illumination effect is not always wanted, nor can it be implemented in every environment. For this reason TRENDSTAND has for years been offering its T1/Y1/G1 profile family: slim double-sided keder profiles that forgo LED. In terms of stability, looks, and handling these profiles for digital prints meet the highest standards. So it is no surprise they are so popular among our clients.

Of course there are also applications where looks and easy assembling do play a big role, while exceptional rigidity is not necessary. Examples are acoustic baffles, ceiling ads, wall inserts, or displays up to a side length of 1.80 m. 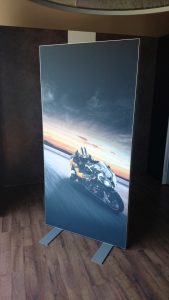 Dedicated to these applications TRENDSTAND has another card up its sleeve, or better two: T1L and Y1L. Based on their big siblings T1 and Y1, these profiles for lightweight frames offer plain or grooved outsides, for visible areas or mounting connections. But although the “L” in the profile name stands for “lightweight”, one cannot see from the outside that users have saved on the inside: The outside width of T1L and Y1L is TRENDSTAND’s standard dimension of 52 mm. This way you may mix regular and lightweight frames, and everything matches perfectly even in bigger complexes.

Another advantage of the lightweight frames profiles T1L and Y1L are their excellent bending properties. Curved walls or cylinders can be manufactured in very small radii, to transport your advertising messages in all directions. Also, like all other TRENDSTAND profiles T1L and Y1L can be powder coated, of course. If aluminum gray is not suitable, all RAL colors and several effect coatings like schrumpflack or hammer paint are doable. 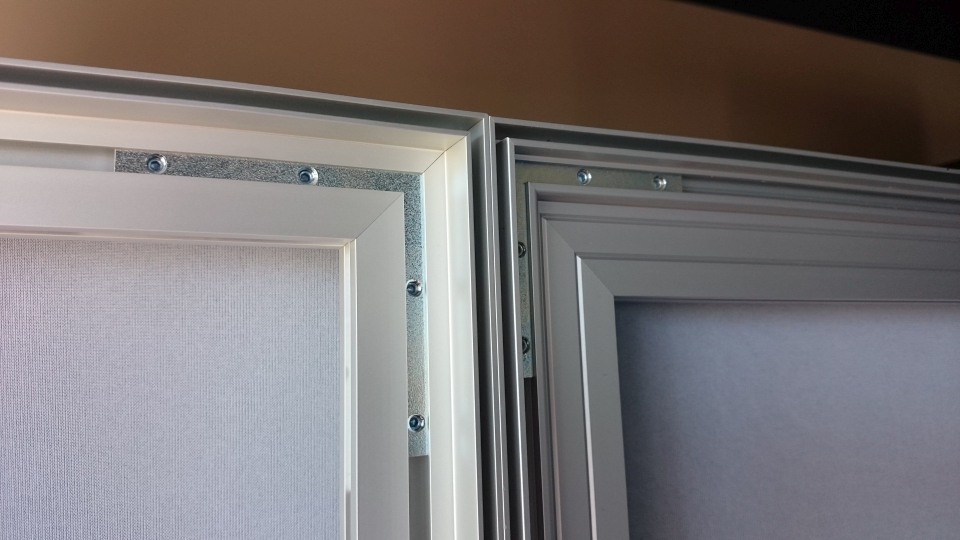 Of course, lightweight frames profiles have to be chosen with care. Our experts will be happy to advise on the limitations of T1L and Y1L, and when you should choose bigger profiles for your digital prints. After all, it is not only the price that must meet your expectations. The overall result must be right and leave a lasting, positive impression on your customers. 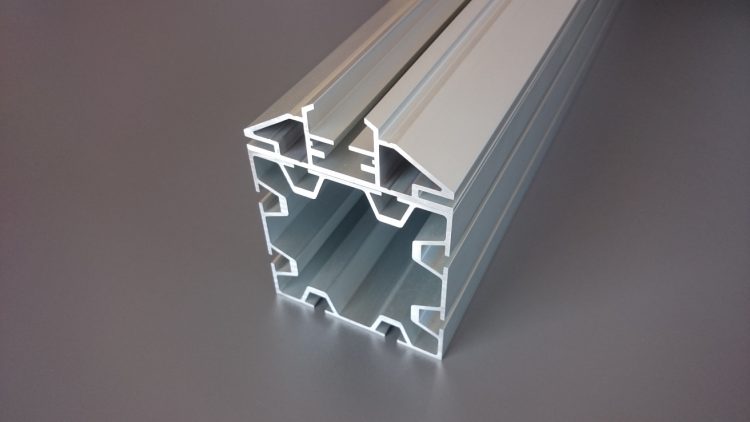 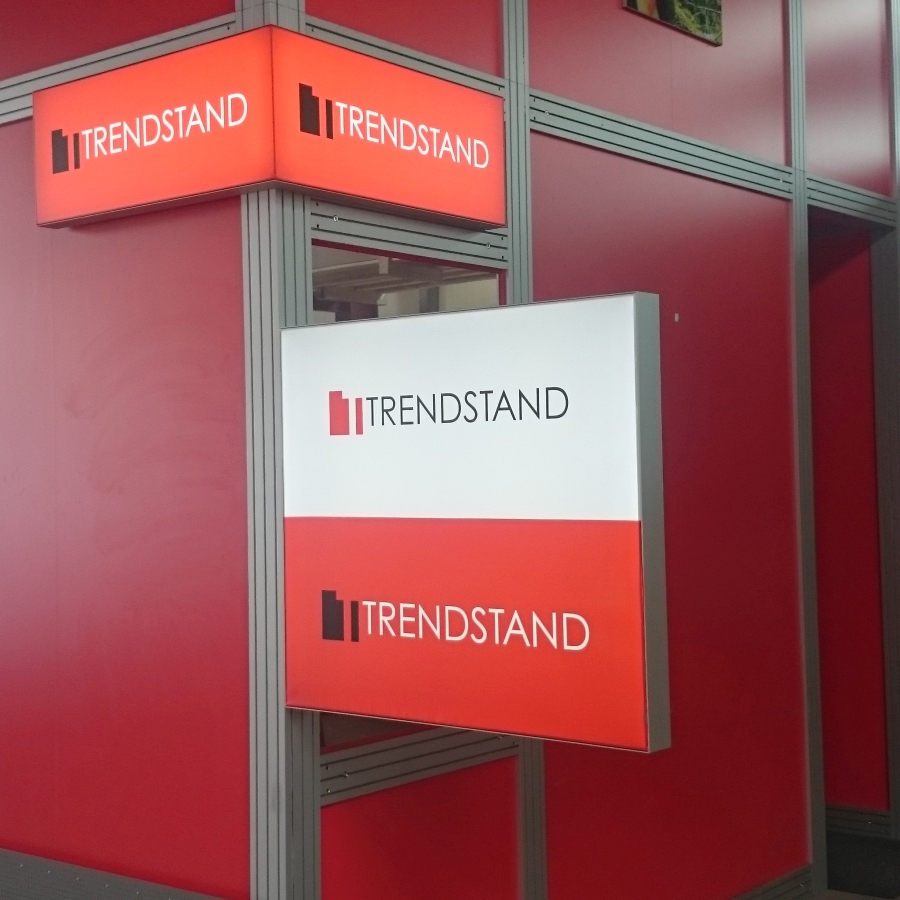 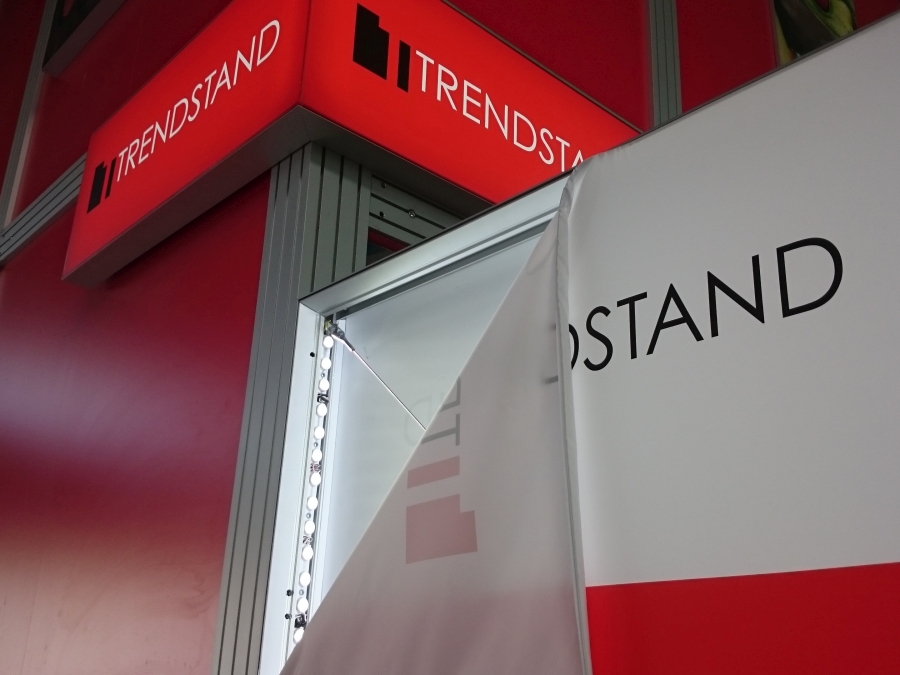 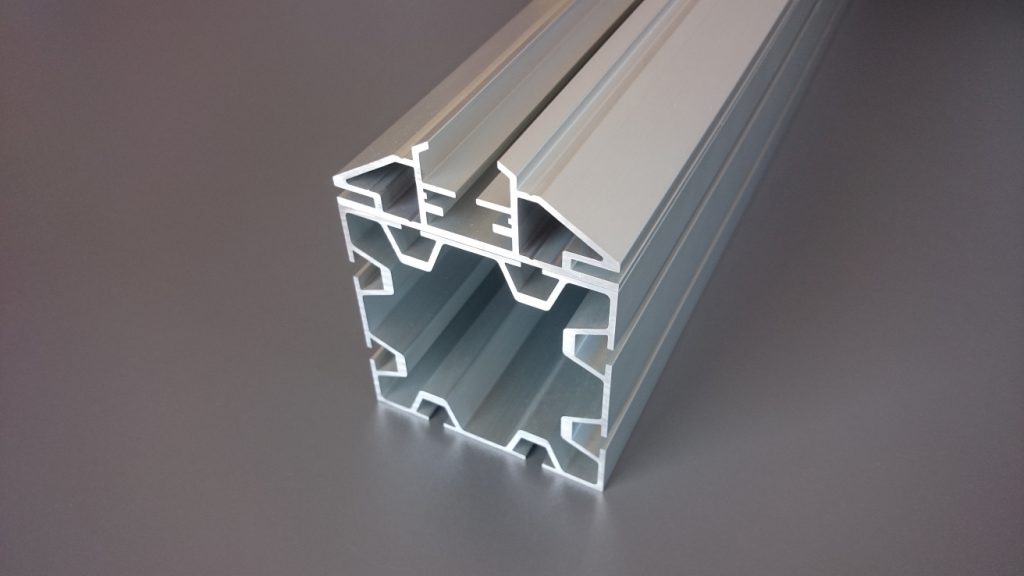 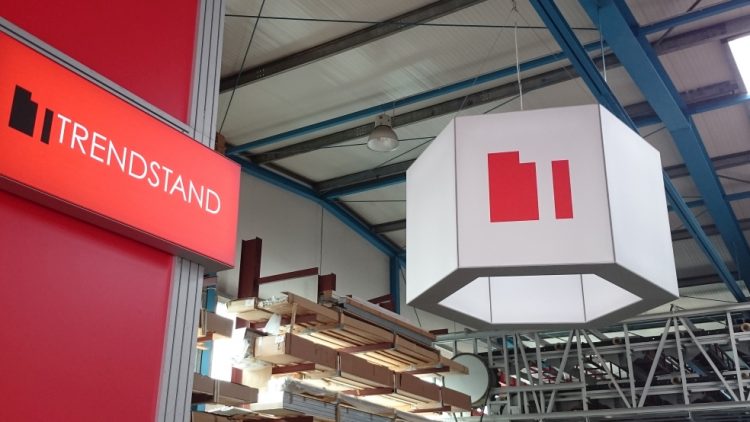 Lightframes Just Around the Corner

TRENDSTAND’s ultra-stable T3 and T5 LED frames for double-sided mounting of digital prints have for years been leading solutions in the market of lightframes with LED rim-feeding. Now with its new T5-3D TRENDSTAND is bringing a variant which allows for three-dimensional wall structures. The special features of the TRENDSTAND solution: there are no dark shadows towards the edges, and any angle between 180° and approximately 75° is possible. This allows not only for L forms, U forms, and rectangles, but also for polygons, meanders, and free forms. 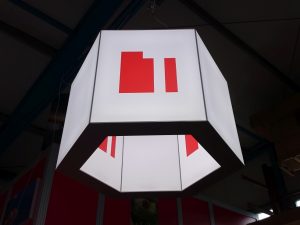 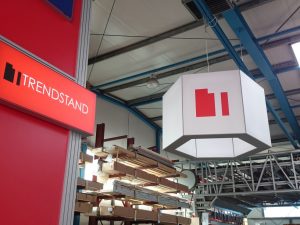 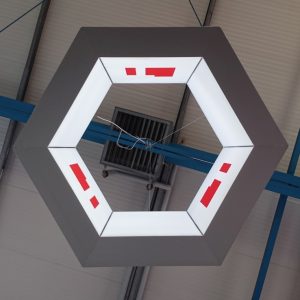 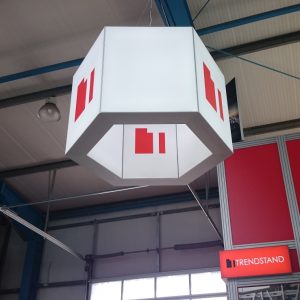 Aside from light walls and backscreens, there are of course a lot more possible uses for T5-3D. Ceiling ads (see above) and also illuminated counters are typical applications that are ideal especially at trade fairs. In an environment where everyone tries to attract attention, such an object purposefully guides the eyes of customers where you want them: on you and your products. But also reception desks with integrated T5-3D lightframes stand out in an impressive way, e.g. at gyms, hotels, or galleries.

Of course, T5-3D LED lightframes are flexible not only in terms of angles. Just like all TRENDSTAND products they are part of a modular construction system, and can thus be integrated in complex builds. Also, they are easily transportable in rod-shaped packages. Or are you uncertain about changing dimensions in future uses? No problem, in case the dimensions of LED lightframes have to be altered, only specific parts have to be replaced or reworked. This way expensive new purchase is most widely avoided.

A Solution With Wanna-have Effect

At the beginning of March—even before the official market introduction—Leipzig’s agency for digital media, Pax Media, installed the first publicly displayed T5-3D lightframes at the Nova|Eventis shopping center. Here in one of Germany’s biggest malls the three-wing LED frame equipped with embedded monitor screens serves as back screen of the new event stage. At this point we would like to thank the center management of Nova|Eventis for the kind photo permission and Pax Media for the challenging project. 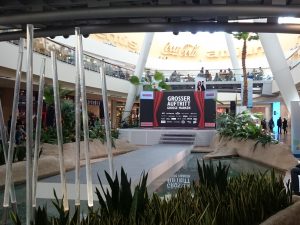 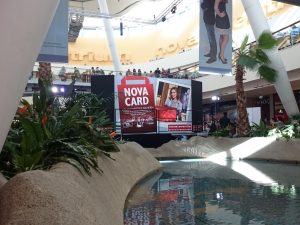 The Lightframe Revolution Goes On

Of course, further development of LED rim-feeding does not end here. Extra slim frames are currently in the final stages of development, and so are round variants. More on this coming soon. 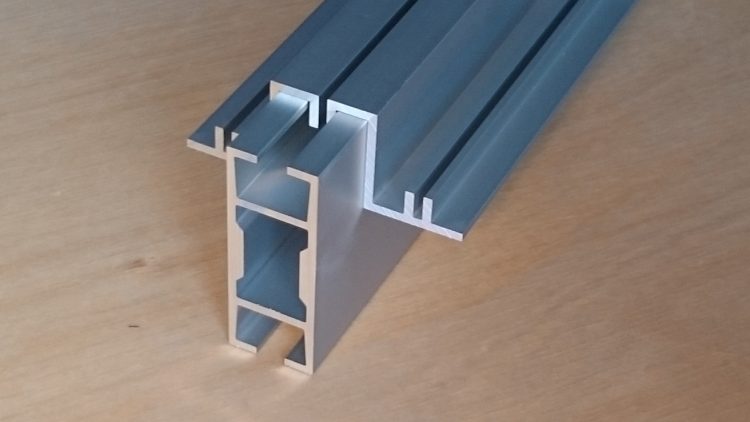 Return of a Classic

TRENDSTAND’s frame designs for trade fair and shop fitting have always featured high flexibility. Due to great demand we have just taken an old classic back in stock: the shelf support profile for our 20 mm rails of the SIGMA, KAPPA, and ZENO model ranges. 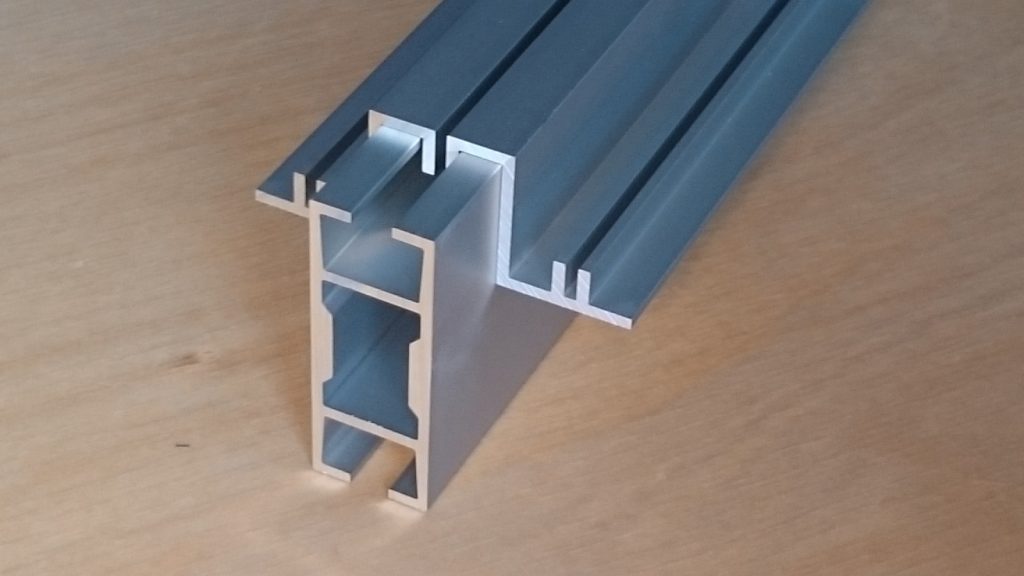 This profile allows you to quickly mount shelves in racks or on consoles, and to deinstall them later without residues. And all this without any additional work steps! Just hook in the support profiles, put the shelf on—done. 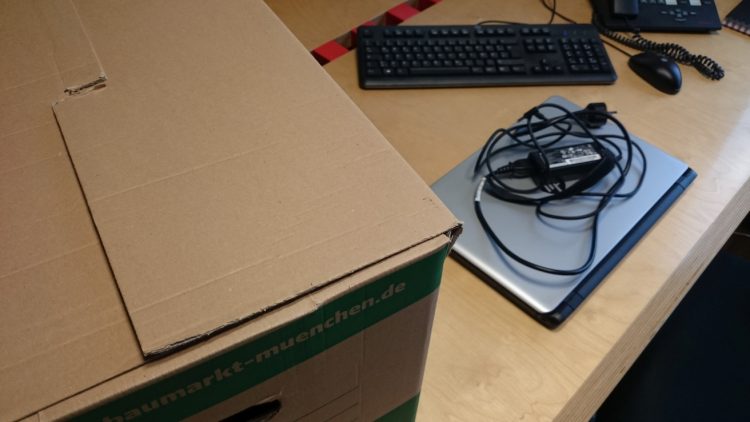 Exceptional design and visualization services have always been a major part of TRENDSTAND’s offerings, as well as customer support from two locations. Unfortunately, the building in Unterföhring previously used by our Design Office Munich now falls victim to long-planned measures in the sense of “Our village shall become more beautiful”.

Therefore, from Monday, 01/30/2017 you find us a couple miles away in Eching/Dietersheim. So we stay in Munich’s surroundings, and for you nothing changes but the postal address (see contact page).

Mr. Kargl and the TRENDSTAND team are looking forward to the further collaboration with you!

p.s.: Telephone companies do make mistakes in relocations sometimes. In case you cannot reach our Munich numbers right away, please contact our main office. Thank you! 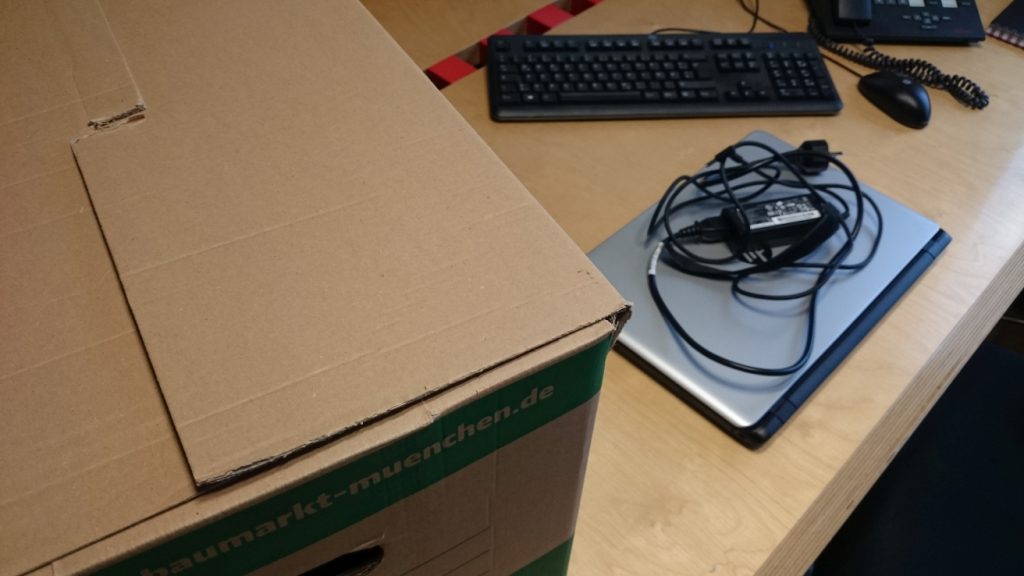 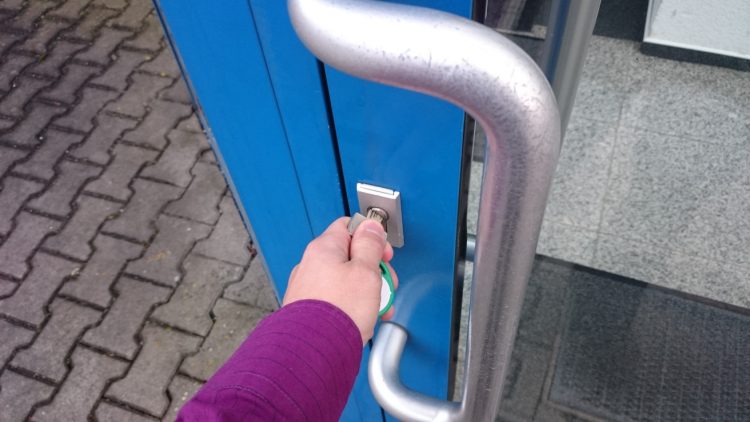 We thank you for a year 2016 which has equally been distinguished by lots of work and lots of success, and we hope to have more than fulfilled your expectations during the past twelve months. Now it is time for a short rest for us, and so we have a shutdown period from December 23rd until January 1st. On January 2nd we are already here for you again and looking forward to your inquiries and orders!

We wish you pleasant holidays and a great start into a prosperous new year! 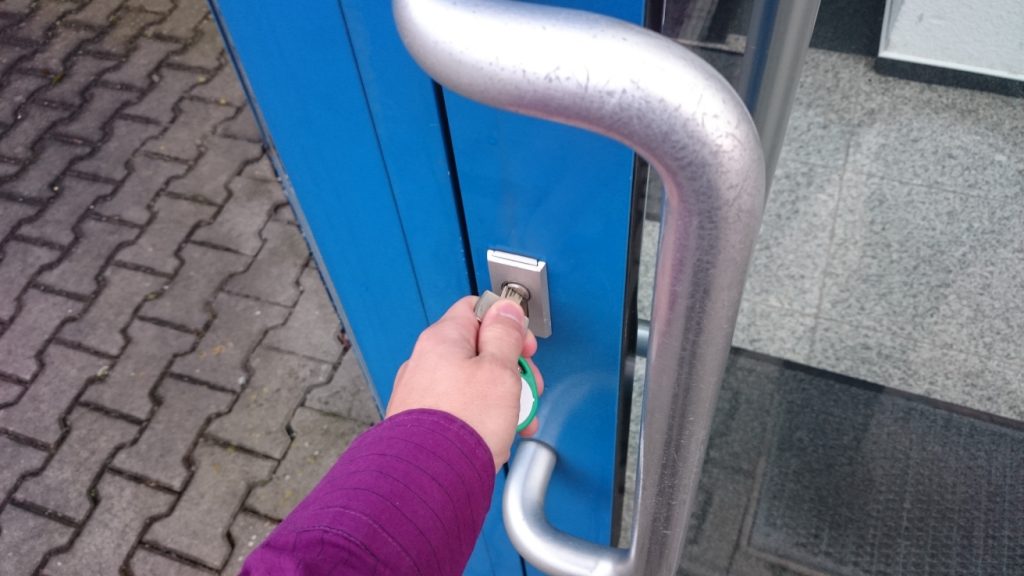 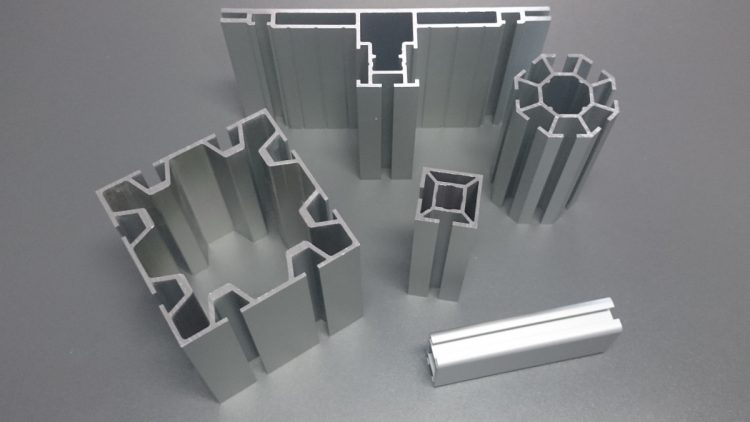 For a great start into the new year we are now giving you an extra 5% discount on all aluminum profiles*! The offer is limited—so being quick is advantageous! 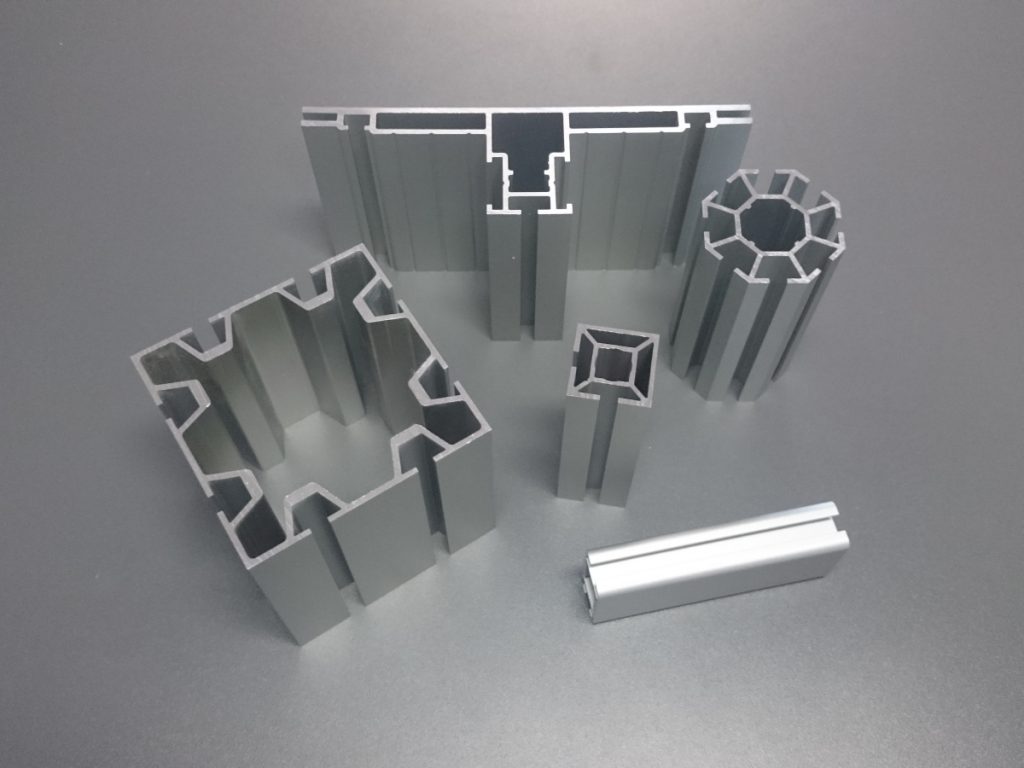 *) The special offer is valid for all deliveries of tailored TRENDSTAND articles with a delivery date until the end of January 2017, guaranteed by TRENDSTAND via order confirmation until 01/13/2017. The offer is valid only for tailored profiles in complete products; for mounting parts, digital prints, and accessories (e.g. LED lighting), as well as for standard profile rods the regular conditions apply. We reserve the right to reject orders that cannot be carried out due to capacity reasons. 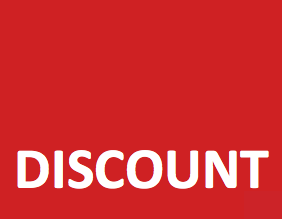 Many customers are waiting for our summer special offer every year. This year we even had two of these, and because of the great success we are prolonging our cube offer once more with a limited contingent, until 08/19:

For orders of cubes and cuboids of our exceptionally stable KUBUS profile we give you a fabulous 60% discount on the list price of profile and tripod (cube corner)*. The offer contingent is limited to an additional 25 pieces—so being quick is advantageous!

*) The special offer is valid for all deliveries of tailored TRENDSTAND articles with a delivery date until the beginning of fall on September 23<sup>rd</sup>, guaranteed by TRENDSTAND via order confirmation within the special offer period. The offer is valid only for frame profile and corners; for digital prints and accessories (e.g. LED lighting) the regular conditions apply. We reserve the right to reject orders that cannot be carried out due to capacity reasons. 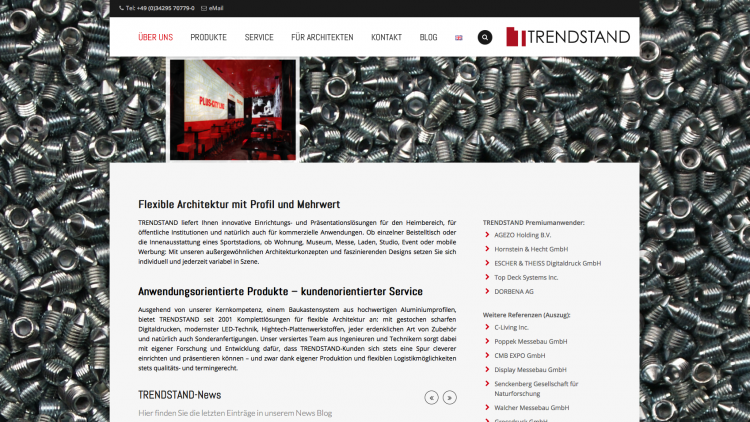 While others are still enjoying the beach vacation, TRENDSTAND is already preparing the fall season, bringing a new website. Besides the fresh new look our Internet presence now sports three additional features:

We would be glad to regularly welcome you back at www.trendstand.de.